My favorite chunk of dialogue: “Harmonicas give voice to the transient murderer inside us.”

The continuing adventures of Nick Moss, private detective in the City of Devils , Fifty Feet of Trouble delivered on a number of levels; although I must report that I didn’t actually realize the significance of the title until the end and am somewhat embarrassed about it because it’s really perfect.

It was pretty easy to get distracted away from cataloging familiar situations and tropes in this one and I’m glad so much ground work was laid in City of Devils. It may be a surprise, but, I’m not as familiar as many readers might be with noir and classic hard-boiled detective stories. My mystery choices tend to be more Lansdale and Leonard than Hammett and I still found it really easy to see where the weirdo stuff, snappy dialogue, and I have to say- a lot more horrific elements this time (Damn those clowns right to hell!) of the mysteries I’m used to and the salty (pretty literally in this case) detective traditions stomp around with each other. Really though, damn those clowns. And they had their own church! That was effing terrifying. Robinson managed to broaden the world and give several City of Devils characters much more depth, including main meatstick Nick Moss, (and Serendipity got much more of a chance to glisten and shine with slime, which I didn’t know I was waiting for as a reader until after I finished) while also presenting a thoroughly sign-posted and well heeled pulpy as hell mystery. There’s some seriously deft handling of a large cast in a smoothly readable, surprisingly short amount of space. I never got confused. And now I know what happened to Escuerzo. Sheesh. 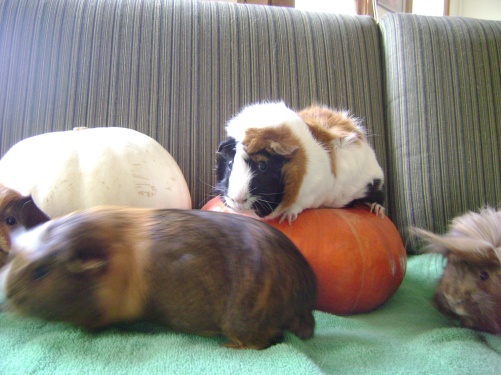 Meanwhile, my last pumpkin photo shoot was a less than deft example of how to handle a lot of characters. As always, Horace was being a good pig. Ozma, Peregrine, and Danger Crumples were not having it. Guinea pigs. Familiars of the thwarting kind.

One response to “My favorite chunk of dialogue: “Harmonicas give voice to the transient murderer inside us.””